San Francisco State University is home to one of the top Television Production and Journalism schools in the country. That success is due in no small part to the fact that the students learn early how to effectively plan and budget their projects using FastTrack Schedule.

Putting students on the FastTrack

For William Hazelwood, a Professor of the Broadcasting Electronic Arts Communications Department, FastTrack Schedule is an integral part of his curriculum. He uses the program to help students understand the need for planning in the television and film production process. Each semester Hazelwood asks his film production students to devise their dream work project. Then, by using FastTrack Schedule to create step-by-step plans, the students build production schedules for documentaries, music events, or television series. Every activity from brainstorming creative ideas, scouting location sites, hiring crews, casting talent, editing scripts, getting client approval, and starting distribution can be displayed in FastTrack Schedule's Schedule View. 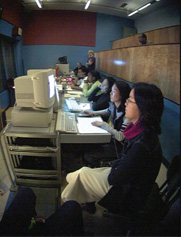 "With FastTrack Schedule, students see that any process can be broken down into relevant and related parts. Then they were better able to translate those production items into line items in a budget."

Those Who Can, Teach

Hazelwood teaches his students from firsthand experience how valuable FastTrack Schedule is to a film industry professional. That's because he uses the program to manage projects for his own production company, Sojourna Productions.

Says Hazelwood, "I became a believer in FastTrack Schedule through my independent production company work. A Fortune 500 client needed a complex project turned around quickly. When asked if I could do it I said, 'Rather than me telling you I can, let me show you how I will.' They said they had never seen such an easy-to-read production schedule."

His pre-production approach, which is based on FastTrack Schedule, allowed Hazelwood to attract new clients to the point that in three years, Sojourna Productions has tripled its revenues. He attributes this success to the fact that he and his associates were able to produce a variety of products efficiently and effectively. 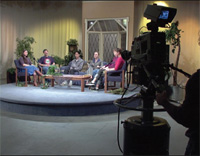 Now, Professor Hazelwood is passing some of that success along to his students by teaching them to use FastTrack Schedule to organize, track and manage their production projects. In fact, his methods are so popular that the University has seen a marked increase in students enrolling in his production planning class from outside the Broadcasting Department.

"Word has spread that I teach how to use tools that enable students to be successful both professionally and personally," says Hazelwood.